Veteran American actor, John Amos, who recently reprised his role as Cleo McDowell in ‘Coming 2 America’, the sequel to the Eddie Murphy classic, says he would like to see the next generation of African-American filmmakers forming a true creative relationship with the brother across Africa.

He made the pronouncement in an interview on Ameyaw TV. Amos believes that in order for African cinema to capture global audiences, the continent’s filmmakers have to capture global imagination, which encompasses all peoples.

“I would love to work more closely as opposed to just participating in one African film. I would love to establish a relationship with some African filmmakers and ask them how can you best utilize my talent and my relationships in the industry to move forward.  The possibilities of the stories that could come out of Africa alone could fill a library of incredible dimensions. It is absolutely endless!

He continues: “And when I think of that I get excited because my son, K.C Amos, is an accomplished filmmaker and he is capable of seeing some of these stories be told.  He can team up with some African writers, directors and filmmakers to tell these stories. We have some incredible stories to tell.  I look forward to the next generation of African-American filmmakers forming a true creative relationship with the brother across Africa. It’s going to be a very exciting times.”

John Amos’ work cuts across genres, film, television and stage. This includes the 1977 miniseries Roots, for which he received an Emmy nomination. Amos’s other television work includes The Mary Tyler Moore Show, The West Wing, and The District. Amos has appeared on Broadway and in numerous films in his over four-decade career. He has been nominated for a Primetime Emmy Award and an NAACP Image Award. On film, he has played numerous supporting roles in movies such as The Beastmaster, Coming to America and Die Hard 2. 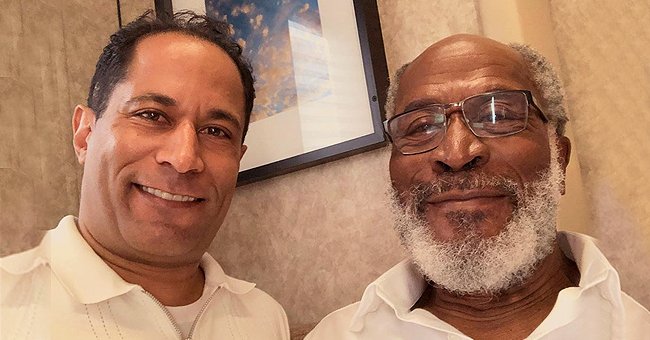 “There is a lot of projects my son Kasey and I refer to them as a war chest. That is those projects that we individually and collectively have created and know will be wonderful stories to share with the public whether they be for television or for film.

“The most immediate thing he is working on is the biopic of my life and career, which is over 50 years. I think I have got a few stories to tell that will make people laugh, cry and say oh my god I don’t believe… but you will believe. We’ve got a series that we anticipate being executive producers on.”

John Amos can also be seen in the independent film,  ‘Because Of Charlie’. ” It deals with a dysfunctional family, of just about every diverse ethnicity that you could imagine and all the demographics involved, that come together for a friendly reunion. They get really close as a result of the hurricane which has been named by the meteorological society as Charlie. I am proud to be part of this small but important film, this is a simple  but an effective story. “

“In addition, my son and I have some other projects that will be better known to the public in a short amount of time,” he concludes.