5 Interesting Facts About The Aegean Cat

If you are thinking of bringing a new member to your family in the form of a four legged mewoing monster, then you are undoubtedly making the right decision. Okay, sure, the monster part might be exaggerated, but we all know how mean cats can be, so to speak, which is why they just might deserve to be named little monsters. Let us not get off topic, though. I’m sure that you’ll enjoy the new addition to the family.

The only thing that you have to do now is decide which particular cat breed to get. You might have a few in mind already, or you might be completely oblivious as to which one to choose. In any of those cases, I have a suggestion to make. How about you give the Aegean cat a chance? I’m sure that you’ll love their need for human interaction and their playful and quirky nature.

There’s no doubt that you have heard a few things about this particular breed already, but you might want to do some more learning before making your final choice. Of course, proper research is required every single time you want to get a pet, because you need to learn how to take good care of the animal, as well as what it is that the creature will enjoy space wise, food wise, as well as exercise wise. That’s always the first step you should take before adopting just any pet.

Since I am sure that you have already done your fair share of research regarding Aegean cats, given that you are considering getting one, here’s what I’m going to do. Instead of giving you the regular rundown on this breed’s personality traits and its needs, I am going to treat you with a few interesting facts on the Aegean cat. Those will also help you get to know the breed better and, who knows, you might even fall in love with it before even getting your own Aegean. So, here we go. 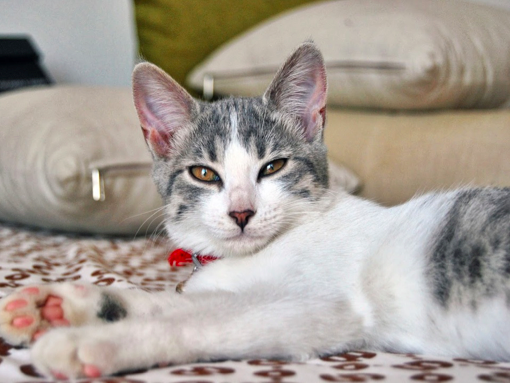 5 Interesting Facts About The Aegean Cat

It Is Highly Esteemed In Greece

When you think about the origin of just any feline, it probably never occurs to you that the particular breed might just be regarded as a national treasure in the country of its origin. Well, get ready to have your mind blown, because it appears that the Aegean is that esteemed in Greece. This is because it is thought to be the only native Greek cat discovered in the Cycladic Islands over 10,000 years ago.

You can get better acquainted with the breed here: https://en.wikipedia.org/wiki/Aegean_cat

Here’s another interesting fact that might not have even crossed your mind. Cats weren’t always domestic animals and the truth is that people had to put some effort into domesticating them. Well, the Aegean was actually among the first domesticated breeds. I guess that they just loved spending time with humans from the moment they came in contact with them.

It Wasn’t Official until 1990s

You would think that their early domestication would definitely make this creature an official feline breed rather quickly, but that didn’t seem to be the case with the Aegean. In fact, they weren’t officially named a feline breed up until the 1990s. Since then, it has become an even more popular family pet and people all around the world have fallen in love with it. Of course, the Greek are the lucky ones, since this breed is quite rare outside their country.

It Developed Without Human Intervention

Nowadays, there are all kinds of different breeds of various animals and it’s mainly thanks to human intervention. Yet, there are still a few rare gems that have developed without human intervention and that have survived up until now all on their own. The Aegean is one of those gems and, among other things, that makes this breed extremely healthy. Learn more about this feline on this website.

While it is generally regarded that felines aren’t quite on good terms with water, the Aegean can prove us all wrong and bust that myth in an instant. Namely, this breed simply loves being in water and it’s not a stranger to swimming and even fishing. This is probably due to its origin, but whatever the reason might be, it’s fascinating.